Dreams and Deceptions: The MacKenna Saga Book One

Sentenced to imprisonment in Cold-stasis, instead of the death penalty Kalen MacKenna awakens twenty-five years later to a world changed beyond anything he could have imagined. Setting out on a journey to prove his innocence, he discovers nowhere is safe and everyday leaves him with few people he can trust, and more questions than answers. Who are these people waiting for him at every turn? Kalen flees into the southern mountains. While on the run, he discovers an injured woman who may or may not be part of the mercenaries searching for him.

Kalen must figure out, in short order, who to trust, while staying one step ahead of those trying to kill him. Peeling back the layers of his father’s hidden past, he learns that even secrets you don’t know can get you killed.

For hard copies, please choose an option below and check out through Paypal. 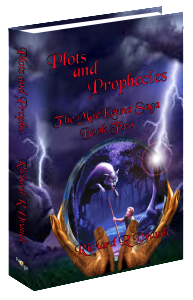 Surviving Jenna’s attempt to bury them alive, Kalen and Mayla take refuge in the Barrera Wilds. While hiding they unlock some of the mystery surrounding the death of Kalen’s wife Jancee and Russell, his father.

Flying north, Mayla takes Kalen to meet her father, Quintin Santiago, once a close friend of Russell MacKenna. From Quintin he learns of the betrayal dividing the MacKennas and the Santiagos. Kalen’s knowledge of the past allows him to settle the dispute and reunite the two families.

While staying with Mayla’s brother, Kalen uncovers clues pointing to answers in the northern mountains. He and Mayla head for the town of Castlebar. Before they can begin their quest, they are drugged. Kalen awakens to find himself alone, in the cargo compartment of a flyer, kidnapped, and headed for certain death.
Can he survive long enough to uncover what his father suspected is really happening to their world? And what of Mayla? Has she paid the ultimate price to find the answers they need?

Buy This Book On:
Amazon | Smashwords

This site uses Akismet to reduce spam. Learn how your comment data is processed.